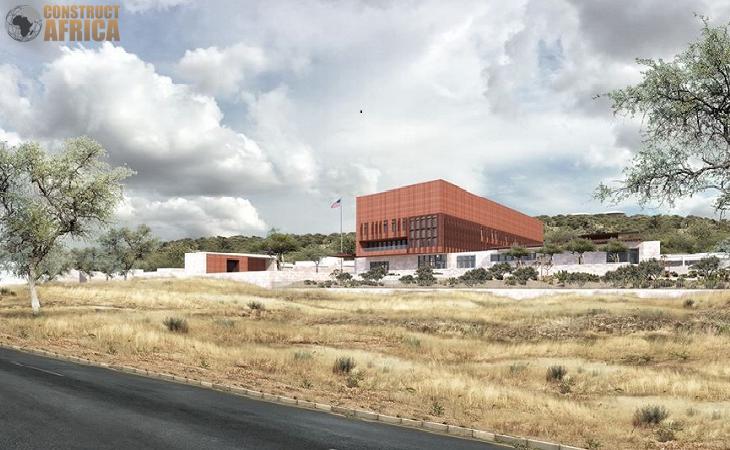 A ground-breaking ceremony has been held for the building of a modern, state-of-the-art new United States Embassy campus in Windhoek, Namibia.

The ground-breaking ceremony was performed on Thursday, 23 July 2020, by U.S. Ambassador Lisa A. Johnson, Deputy Minister of International Relations and Cooperation Namibia, Honourable Jenelly Matundu, and the Mayor of Windhoek, Her Worship Fransina Kahungu.

Completion of the new U.S. Embassy campus is scheduled for 2023. At the ground-breaking ceremony for the project, US Ambassador to Namibia Lisa Johnson said construction of the compound would take three years to complete at a cost of more than N$300 million (approximately US$20 million).

American construction firm, BL Harbert is the main contractor for the project.

“BL Harbert has hired over 200 Namibians who now are part of the team building the embassy. During the three years construction they will hire more than 2,000 Namibians to help build the embassy during different phases. They are also procuring materials, goods and services from Namibian companies,” said Ambassador Johnson.

Deputy Minister of International Relations and Co-operation Jenelly Matundu said the project added value to the strong constructive relations between the two countries over the last 30 years.

According to Ambassador Johnson, the project is already injecting more that U$700,000 in the local economy each month. Johnson said the new embassy will evoke Namibia’s beautiful landscape, featuring materials including red sandstone and lighy-coloured limestone. “Landscaping will use exclusively indigenous tress and other plants and the facility will make solar power to generate 50% of the main chancery’s power needs,” she said.

Once complete in 2023, Ambassador Johnson said the embassy campus doors will be open to the public and an American Centre, where the Namibian public can learn more about America, will be incorporated into the main embassy building.

According to a fact-sheet posted on the website of the U.S. Embassy in Namibia, anyone interested in applying for a job helping build the new U.S. Embassy should send an SMS to 081 335 0683 (local Namibian number) with Last Name, First name and Position or send an email to Windhoekhr@blharbert.com.

Economic Benefit for the Namibian Economy