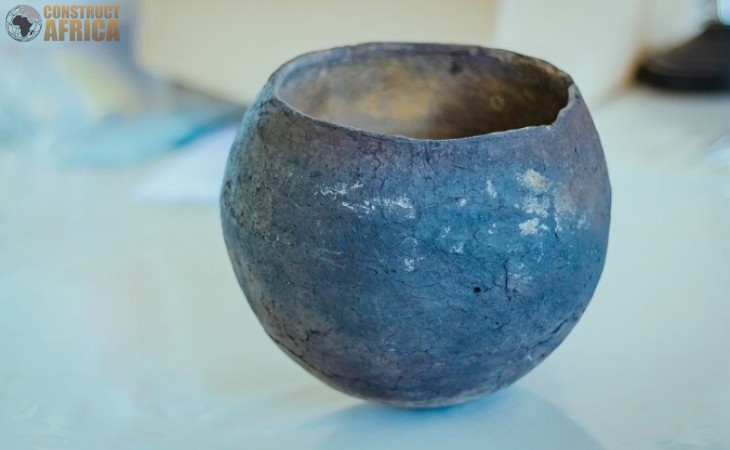 A rare artefact dating back to the 19th century has been discovered during ongoing archaeological excavations undertaken as part of the Lesotho Highlands Water Project Phase II’s Cultural Heritage Management Plan.

The rare discovery of a whole pot (moritšoana) found in an upside-down position was made on 17 November 2021 during an excavation of a site locally known as Langalibalele’s (sunny day) Shelter, at Ha Rafolatsane, along the Sehonghong River in the Mokhotlong district. The excavations extend three metres below the surface to bedrock and is the deepest Later Stone Age shelter site excavated in Lesotho to date.

This is the first whole pot discovered in the mitigation of 27 archaeological sites to date. Jordan Scholfield, the LHDA Young Professional, placed with  the cultural heritage management programme headed by PGS Heritage, says preliminary indications are that the rare discovery dates back to the late 1800s (19th century).

“Throughout our excavations of archaeological sites in the study area, we have found pieces of pottery associated with hearths in the deposits. Due to trampling of the shelters over the years by both humans and livestock, we did not anticipate finding an intact pot. We are excited to have made this discovery. Our preliminary assessment suggests that the pot is of Basotho origin. However, it is not yet evident whether the Bushmen obtained it from Basotho groups living in the lowlands or whether this was brought in by Basotho herders in the latter half of the 19th century. Historically, Basotho groups arrived and settled in the Mokhotlong district in growing numbers between 1873 and 1880 when Bushman groups were still present in the area. Pending radio-carbon dating of  the site will assist us in giving the pot context,” said Jordan.

Another exciting discovery during the excavation of Langalibalele’s Shelter is the unearthing of, until now, 240 stone arrowheads. Such a tally has never been recorded from any known Later Stone Age context in the southern African interior.

Prof. Peter Mitchell, of Oxford University, records 29 such points/discoveries for all archaeological endeavours in the whole of Lesotho since the 1960s. A recent Master’s thesis submitted to Wits University tallied only 60 such points from their known distribution on the Highveld in South Africa.

The site is thus likely to end up being key in our understanding of the production, practices, and social significance of these small stone arrowheads across their recorded distribution.

Len van Schalkwyk, the in-country Cultural Team Leader for PGS Heritage, asserts that “What is becoming apparent from the excavations conducted under the heritage management plan for the Polihali Dam Basin is that the Lesotho basaltic highlands were indeed not, as is conventionally perceived, considered refugee areas by the hunter-gatherers, but instead they were considered as living space in a landscape these people considered home.”

These arrow points and other artefacts such as stone tools, pottery, metal items, jewellery, wild and domestic animal remains, and charcoal, wood, leather, ostrich egg-shell beads, fish remains, and bone tools retrieved from the different sites, according to Len, continue to support their assertions that the basaltic highlands were home to hunter-gatherer Bushman groups for thousands of years. In historical times Basotho, too, have used these shelters for temporary shelter and in the shepherding and herding of livestock. However, Langalibalele’s Shelter is proving to be “the jewel in the crown”.

“We are excited about the latest rare discoveries made on the cultural heritage contract. Our aim with the ongoing studies is to conserve the cultural heritage finds for future generations. We are proud to confirm that in achieving its mandate, the programme has entailed not only excavation and field recordings of the highest standards, but highly exact post-field cataloguing, preliminary analysis and curation of the excavated material. Mitigating these sites is providing considerable insights into how hunter-gatherers used the Polihali mountainous areas over a period of possibly 4000 years and insights into the hunter-gatherer/farmer interactions in more recent historical times,” states Gerard Mokone, the LHDA Polihali Operations Branch Manager.

Besides the Archaeological Baseline Study commissioned by the LHDA in 2013 and the subsequent Cultural Heritage Plan currently being developed and implemented by PGS Heritage, the Polihali area has seen very little previous archaeological research. Thus, the Project contributes significantly to protecting the cultural heritage resources for future generations and provides a basis for exciting future research, both within Lesotho and internationally.