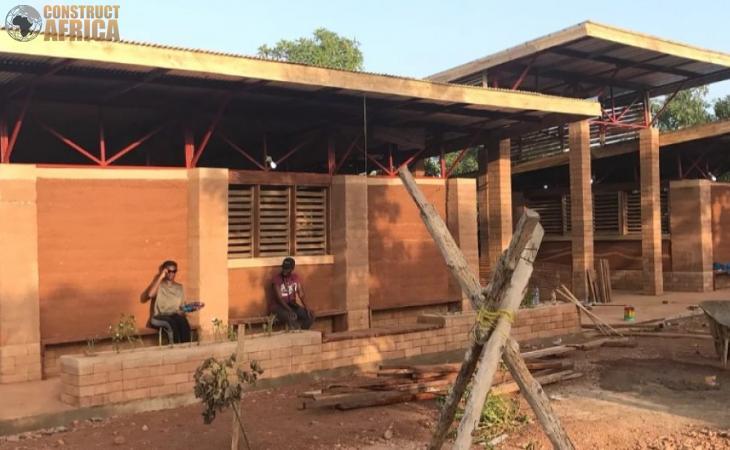 The demand for affordable housing in Ghana is at an estimated 1.7 million units and growing, and that’s a challenge shared across Africa.

Kwame Deheer and Joelle Eyeson, the co-founders of Hive Earth based in Accra, are up to that challenge with an eco-friendly building design that draws on centuries of history, while their business draws on Eyeson’s previous experience in property management in the UK.

Deheer and Eyeson essentially build homes from mud, using a 21st-century technique that leverages the power of bioclimatic design. The Hive Earth team say they can deliver a modern, maintenance-free and well-appointed one-bedroom home – plumbing, wiring, fixtures and all – for as little as USD$5,000.

The Hive Earth concept relies on “rammed earth,” the name for this modern iteration of building with mud. “The construction is as strong as concrete and lasts thousands of years, in fact parts of the Great Wall of China were built with rammed earth and it’s still standing today,” Eyeson said in an interview.

One of the reasons Deheer, the duo’s expert on the method, and Eyeson decided to go with mud was because of the climate impacts of concrete production. Cement accounts for about 6 to 7 percent of the entire planet’s carbon emissions, producing concrete is resource-intensive, and Hive Earth wanted to design buildings that are in harmony with their climate and culture. Local materials made more sense.

There’s no reason not to use mud, especially in the African heat. The mud walls serve as insulation to keep the house cool, and at 12 to 15 inches thick they keep it soundproof and safe. That decreases or completely eliminates the need for air conditioning in communities on the continent where it’s affordable and energy is readily accessible. Elsewhere, the passive cooling can reduce extreme heat exposure that affects health, food, hygiene and other common issues at home.

Other benefits include the resistance to insects, and the absence of toxins. These mud walls are highly finished, with careful geometric lines and an entire palette of colors available to complement other locally sourced materials. The hues are worked into the wall itself so that the surfaces never need to be repainted, which eliminates those chemicals too.

Deheer and Eyeson also focus on creating jobs while boosting the circular economy by using recycled materials. They have a passion for youth employment, one of Africa’s biggest challenges as people compete for job opportunities on a continent that expects to add an estimated 1.3 billion people through 2050. So Hive Earth has trained and hired their own construction staff, preferring  people to machines. They’re also doing consulting and providing workshops on how to build with mud.

“We believe that we have a product that can really help solve the affordable housing crisis on the continent,” the Hive Earth team says. “Because of its labor-intensive nature it can provide hundreds of jobs for young people who are not educated.”

Next up for the team in Ghana is Hive Earth Studios, an associated business to create furnishings and home décor too.

This article was originally published by Sustainability Times.  ConstructAfrica has re-published the article with permission. Please click here to read the original article.

Sustainability Times is an online media portal for news, debate and analysis on every facet of sustainability - highlighting the latest news in sustainable business and industry, sustainable development, environmental protection, and the global fight against climate change.