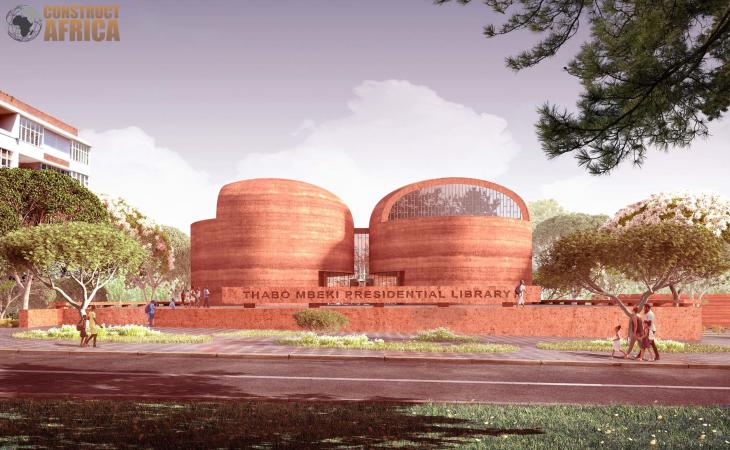 The design includes sustainability features such as solar power and a rammed earth facade made from locally sourced mud.

Described as a centre of excellence, learning, research, discourse and cultural exchange predicated on African perspectives, the proposed library will be located in Rivonia, a suburb of Johannesburg, South Africa. Adjaye Associates is collaborating with Johannesburg-based MMA Design Studio as architects for the project.

Speaking at the launch of the design, former President Thabo Mbeki said it would be more than a library; and would be a repository for African leaders’ papers, artefacts and collected works. “As Africans, we need to do something that communicates a better future — a library can do that. I’m inspired that in terms of what will be visible, what Sir David has done, just the image says we can do better as Africans,” Mbeki said.

Giving an overview of the design, Sir David Adjaye, who recently won Britain’s highest architecture award (the RIBA Gold Medal), said it would be the first carbon-neutral building on the continent. "Use of locally sourced compressed mud in the form of a rammed earth facade, terrazzo flooring made from local stone and timber cladding from local wood species collectively reduce the overall carbon footprint of the structure," explains Adjaye Associates.

"Through a site-specific understanding of the subtropical highland climate of Johannesburg, solar harvesting is utilized through state of the art photo-voltaic solar panels, located on the rooftop absorbing sunlight and generating electricity. Geothermal heating and thickened walls harness the earth’s energy by storing heat during the day and releasing it later at night to warm the building when temperatures drop", Adjaye Associates further explained.

"Providing infrastructure for the preservation and distribution of African history and knowledge, the Library will become a new anchorpoint and campus for local and international scholars," said Adjaye Associates.

The new Library will feature eight granary-like domes "meant to evoke grain storage structures in a metaphorical nod to the library’s function as a place to seek “knowledge-based nourishment.”

On completion, the Thabo Mbeki Presidential Library will measure 5,400 square metres and feature a museum, temporary exhibition space, research center, auditorium, a women's empowerment center, reading room, retail spaces, and office space. The facility will also have public space referred to as an "indoor den" and an archive that will act as a repository for the papers, artefacts, and key documents of former President Mbeki.

The Library is being commissioned by the Thabo Mbeki Foundation. Speaking at the launch of the design, Programme Director of the Thabo Mbeki Foundation, Geraldine Fraser-Moleketi, said extensive work had already been done for the project. “Land for phase one of the project has already been acquired and the Library will be right here at the foundation (in Riviera, Johannesburg),” she explained.

Fraser-Moleketi also said construction of the Library would commence late next year (2021), and that the project was made possible by generous donors, but they still needed to raise about R500m for the project.

The Thabo Mbeki Presidential library will form part of the University of South Africa (UNISA) Library. A prototype of the Library is currently housed at the UNISA through a partnership between the Thabo Mbeki Foundation and UNISA.